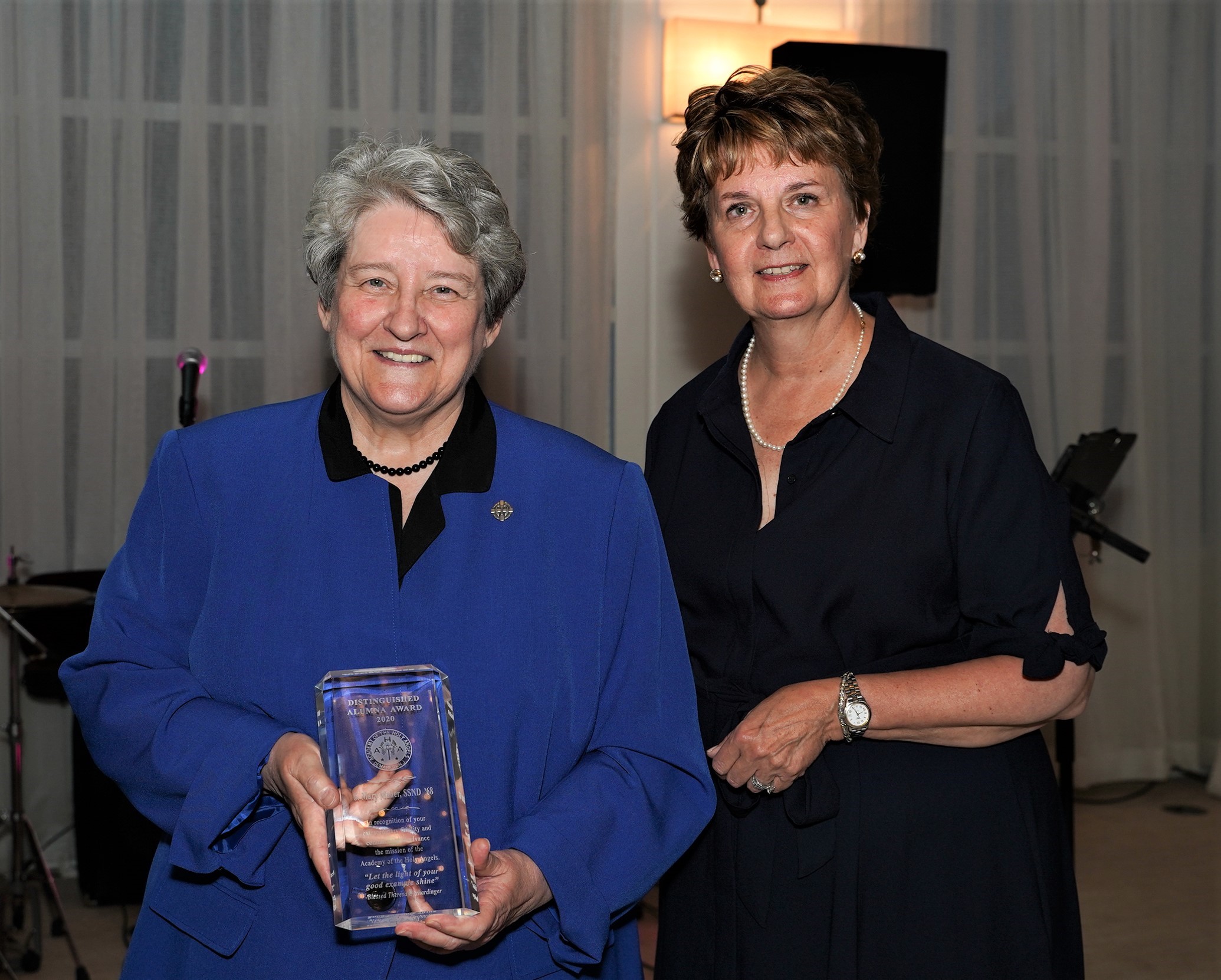 The Academy of the Holy Angels recognized Sister Mary Maher, SSND (AHA ’68), and the Luckow family at this year’s Angelic Evening Gala. The May 26 event, which had been on pause since last year, was held at the Edgewood Country Club in River Vale, New Jersey.

Proceeds from Angelic Evening will fund renovations to the Academy’s auditorium. These much-anticipated updates will benefit the entire AHA community, as the auditorium is the focal point for school gatherings, including Open House events, liturgies, assemblies, concerts, plays, honor society inductions, and many other programs.

AHA President Melinda Hanlon opened the event by presenting the Luckows with AHA’s Legacy Award. Recipients include Audrey Spiotto (AHA ’64) and Robert Luckow, and Stefanie Luckow (AHA ’02) and Adam Hawkinson. This award is a tribute to members of the AHA community whose contributions reflect the charism of the School Sisters of Notre Dame, and make a lasting impact on the Academy and the people it serves. In her remarks, President Hanlon said she is grateful to the Luckows for their generosity and fidelity to Holy Angels.

President Hanlon also introduced S. Mary Maher, who received the AHA Distinguished Alumna Award. Hanlon recalled their first meeting in Italy, when Hanlon was on a formation ministry trip, and how S. Mary’s welcoming personality helped the two women establish a lasting rapport. S. Mary, who has served as School Sisters of Notre Dame General Superior, and now serves on the AHA Board of Trustees, was recognized for her extraordinary loyalty, commitment, dedication, and service to the advancement of AHA.

In her acceptance speech, S. Mary said she considers her award a precious honor. She commented on the changes that have occurred at Holy Angels since her graduation, focusing on the modernization of the Learning Commons (school library) as a microcosm of the updates that have been made throughout the school.

“You take that change and apply it to anything,” S. Mary said. “This is not your grandmother’s AHA…The changes have been extraordinarily wonderful in everything: in the arts, in athletics, mathematics, science, you name it. It’s been extraordinary.

“The thing that I love the most is what is underneath that, above that, through it, and in it, and that is that the young women, the girls, are formed to be intelligent and socially conscious citizens of this country and the world, and you can see that. If the School Sisters have any legacy, that’s it.”

S. Maher heard God’s call through the School Sisters of Notre Dame. She responded by studying at Holy Angels, entering the convent at 18, and serving as SSND General Superior, the post first held by the order’s foundress, Theresa Gerhardinger. Today, she is a noted theologian.

Born in Oceanside, New York, S. Mary and her family moved to Closter, New Jersey when she was seven. When it came time to choose a high school, the teenage Mary prayed thoughtfully before reaching into a hat. Inside were two pieces of paper on which she had written the names of her two top schools. Although she pulled the name of her second choice, she knew Holy Angels was the right place for her.

She entered the Academy in 1964 when the campus was located in Fort Lee. The following year, she helped move the school library to Holy Angels’ current campus in Demarest. S. Mary made many memories as an Angel. Some of her favorite moments took place while she worked behind the scenes with the AHA Drama Club. S. Mary recalls using pieces of Styrofoam to simulate snow for a production of Charlie Brown’s Christmas Special.

S. Mary served as the last provincial leader of the Wilton Province of the SSNDs and the first provincial leader of the Atlantic-Midwest Province. She later became SSND General Superior, and spent two five-year terms working in Rome, Italy. As the leader of her order, S. Mary came to know Blessed Mother Theresa Gerhardinger better than ever. S. Mary read thousands of Mother Theresa’s letters, and prayed to her many times. S. Mary honored Mother Theresa by establishing the Gerhardinger Fund, an international financial resource. All SSND provinces donate to this fund, and all may draw upon it to cover non-ministerial costs. She added that the fund is part of holding all in common, as the SSND Constitution requires.