51. Inequity affects not only individuals but entire countries; it compels us to consider an ethics of international relations. A true “ecological debt” exists, particularly between the global north and south, connected to commercial imbalances with effects on the environment, and the disproportionate use of natural resources by certain countries over long periods of time. The export of raw materials to satisfy markets in the industrialized north has caused harm locally, as for example in mercury pollution in gold mining or sulphur dioxide pollution in copper mining. There is a pressing need to calculate the use of environmental space throughout the world for depositing gas residues which have been accumulating for two centuries and have created a situation which currently affects all the countries of the world. The warming caused by huge consumption on the part of some rich countries has repercussions on the poorest areas of the world, especially Africa, where a rise in temperature, together with drought, has proved devastating for farming. There is also the damage caused by the export of solid waste and toxic liquids to developing countries, and by the pollution produced by companies which operate in less developed countries in ways they could never do at home, in the countries in which they raise their capital: “We note that often the businesses which operate this way are multinationals. They do here what they would never do in developed countries or the so-called first world. Generally, after ceasing their activity and withdrawing, they leave behind great human and environmental liabilities such as unemployment, abandoned towns, the depletion of natural reserves, deforestation, the impoverishment of agriculture and local stock breeding, open pits, riven hills, polluted rivers and a handful of social works which are no longer sustainable”.

Reflection: Do I connect the environmental devastation on the poorer areas of the world with the five commitments of the SSND? In what ways does ecological destruction and a true “ecological debt” affect migration? Human trafficking? Racist policies in immigration and development aid? Economic, political, and social unrest in Haiti? How do my personal and community patterns of consumption of natural resources contribute to this devastation, with the greatest effects on those who are poor?

Action: Choose one of the five commitments of the SSND JPIC and reflect on how the ways I do business, my life style choices, my patterns of consumption affect that commitment. How might I be more intentional about cry of the earth and cry of the poor in these choices and patterns? How might I incorporate this reflection into my Holy Week journey?

The Justice for Immigrants Committee has prepared reflections on Holy Week and immigration to end our Lenten Series, Called to be Dangerous Women (and Men): The Triune God Impels us into the Heart of the World. Please take a look and consider the poetry, images, and art as you journey through Holy Week. Click Here

Maryknoll Office for Global Concerns is offering an Economic and Ecological Way of the Cross, Friday, April 15, 12-1 EST, Registration is found here. Pray the Stations of the Cross with Jesuit Refugee Services USA on this YouTube video and reflect on how the suffering of Christ continues through the lives of our brothers and sisters who seek safety. Click here.

Prayer for Ukraine and for Peace 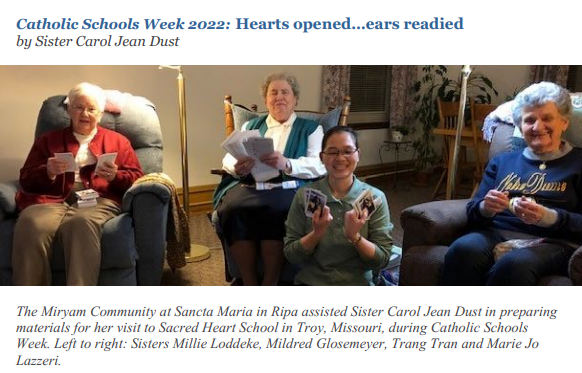 Pope Francis met with indigenous leaders from Canada and issued an apology for the Catholic Church’s role in residential schools where so much documented abuse took place. Read about the meeting itself here, and Canadian reaction here. Reconciliation is a process, not a moment in time, but every process begins with a first step.

April 22-May 1 is 2022 Faith Climate Action Week. Interfaith Power and Light, a Religious Response to Global Warming, has an excellent resource kit that can be downloaded for free. Find the link to the download here.

We are a Laudato Si’ community. Would you like to receive training to be a Laudato Si’ animator, more able to lead others in discussion, prayer, and action toward ecological conversion? To learn more about this training initiative from the Laudato Si’ Movement, click here.

Save the Earth - Pass on the Burger

Reducing greenhouse gases in Earth’s atmosphere is key to reducing the impact of climate change. Did you know that reducing the amount of meat that you consume in your diet is one of the most effective ways to contribute to the reduction of heat trapping greenhouse gases in Earth’s atmosphere? Watch the videos below to learn more. Perhaps you will consider joining SSNDs who are making a commitment to reduce the amount of meat in their diet?

Not only are our food choices critical for the earth, but they are also critical for those who provide many of our food options. Think eating fish during Lent is a low-impact choice? Think again in terms of overfishing our oceans and in terms of human trafficking in the fishing industry. Every choice matters!

175 nations have agreed to a legally binding agreement to address the entire life cycle of plastics, from production through recycling and waste cleanup. A critical piece of this historic agreement is the commitment to addressing the life cycle, as plastics produce pollutants at every stage of that cycle. Only about 9% of plastics produced are recycled, most plastics seeing just one use. The agreement also included microplastics, the tiny pieces of plastic that invade all parts of the environment as plastics break down over time. Learn more. Looking to help reduce your reliance on plastics? Here are some tips to reduce your plastic footprint; share them with others!

The commitment for this year is on Online Child Exploitation. Please take the time, and prepare your spirit, to read this New York Times piece in its entirety. Every child is at risk and they don’t even need to leave home to be exploited. Read here.

If you have not yet sent a Voter Voice to your congressional representatives on the Earn It Act, please consider doing so now! Find the link to this issue and all other current legislative issues here.