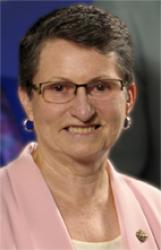 Sister Celeste Reinhart, SSND, is continuing with a second term on the Atlantic-Midwest Council and now serving as vicar. She says her formation for living the constitution, You Are Sent, and her training for leadership has been deeply influenced by her Canadian background.

After spending seven years teaching, S. Celeste then served ten years in Bolivia working in youth and pastoral ministry. Back in Canada, she represented the congregation in ecumenical coalitions for economic justice, human rights in Latin America and World Council of Churches. She organized settlement services for immigrants and refugees in Toronto, Ontario and formed a coalition of organizations to stop human trafficking along highway 403 in Ontario.

Her community ministry has been in vocation and formation work and administration of SSND-owned Notre Dame College at the University of St. Jerome’s in Waterloo, Ontario.

She possesses education degrees from Ontario and Saskatchewan, Canada and learned the educational method of Paolo Freire of Brazil to effect the transformation of persons to find their rightful place as citizens of the world.